As states continue reopening, investors are having a hard time deciphering the path ahead. They hope for a V-shaped recovery but must reckon with the reality of the economy. These talking points highlight the issues that may be concerning clients this week.

“Significant uncertainty remains about the timing and strength of the recovery.”

“This is now one of the greatest surges off a major low ever.”

“The COVID-19 pandemic is the most economically destructive natural disaster in a century…the duration of this disaster also means many jobs lost will never come back.”

If the stock market had an emotion this week, it might be exhaustion. The major indexes are up, with the DJIA rising +1.04% and the S&P 500 climbing +1.86% for the week. Investors are having a hard time deciphering the path ahead as they are caught between a V-shaped recovery and the reality of the economy. Federal Reserve Chairman Jerome Powell warned Congress that the economic damage is “going to be lasting,” and the central bank will need to continue pumping aid.

According to the Wall Street Journal, the number of new COVID-19 cases in the U.S. started to climb again and progress toward a remedy remains painfully slow. New cases within the tri-state NYC area are slowing down, but the number of daily infections outside of the NYC area hit a record this week. This has caused the seven-day moving average of daily new cases to increase substantially off its lows on June 7, 2020. 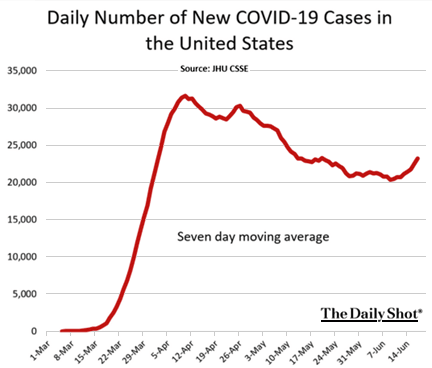 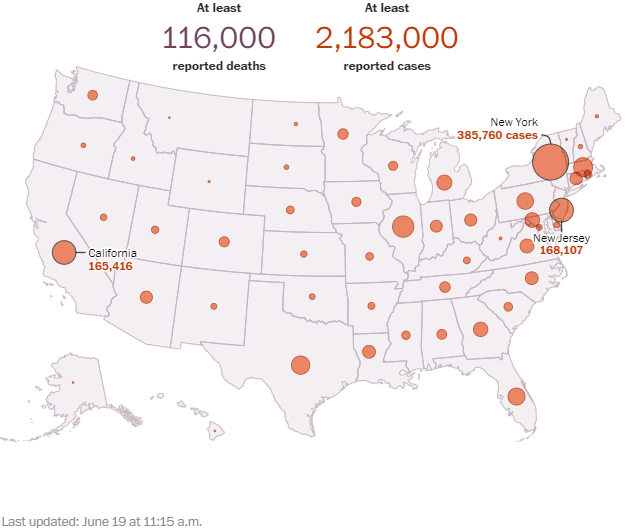 Fed Chair Jerome Powell warned Congress on Wednesday, June 17, 2020 of the risks to the economy if lawmakers do not pass additional fiscal aid. One emergency measure, the extra unemployment benefits of $600 per week, expires at the end of July. He noted that 20 million workers remain displaced. “It would be a concern if Congress were to pull back from the support that it’s providing too quickly,” Powell stated.

Some 1.5 million people filed for unemployment compensation last week, a painfully elevated level considering the crisis began three months ago. According to Powell, “it will hold back the economic recovery if they continue to lay people off.” He also said that if state and local governments don’t get more aid soon, they'll have to start laying off employees. Such layoffs were a significant drag on the recovery from the 2008–09 recession, when 708,000 public employees were laid off in the four years after the recession ended. Powell added, “until the public is confident that the disease is contained, a full recovery is unlikely.”

Officials last week signaled they expected to hold rates near zero at least through 2022. Mr. Powell said the central bank wasn’t close to thinking about raising rates or how to shrink its asset portfolio that has nearly doubled over the past year, to around $7.2 trillion. He also said the Fed hadn’t made any decisions about whether to employ yield caps. “If rates were to move up a lot and for whatever reason, and we wanted to keep them low to keep monetary policy accommodative, we might think about using it,” he said. “It’s sort of an early stage thing we’re evaluating.”

Powell said he expects the economy to move through three phases if the virus remains “reasonably well under control.” The first phase, a sharp contraction, could then lead to the second—a bounce back marked by large increases in re-employment. He said it was possible the economy was in the beginning of the second phase, but he warned that the third phase of recovery would require Americans to regain their confidence engaging in activity that requires close indoor contact or large outdoor gatherings. This last stage could take some time, keeping employment and activity below their pre-pandemic levels. “There are parts of the economy that will struggle to return to their old ways of activity,” Powell said.

3. What else is going on in the economy?

Continuing claims are holding above 18 million which indicates that the labor market is facing a long recovery. The number of workers applying for and receiving unemployment benefits has stabilized at historically high levels, signs that while the labor market is healing, hundreds of thousands of workers are still losing their jobs each week.

Debra Taylor, CPA/PFS, JD, CDFA, is the principal and founder of Taylor Financial Group, LLC, a wealth management firm in Franklin Lakes, N.J. Debra has won many industry honors and is the author of My Journey to $1 Million: The Systems and Processes to Get You There, a book about industry best practices. She is also a co-creator of the Savvy Tax Planning program.